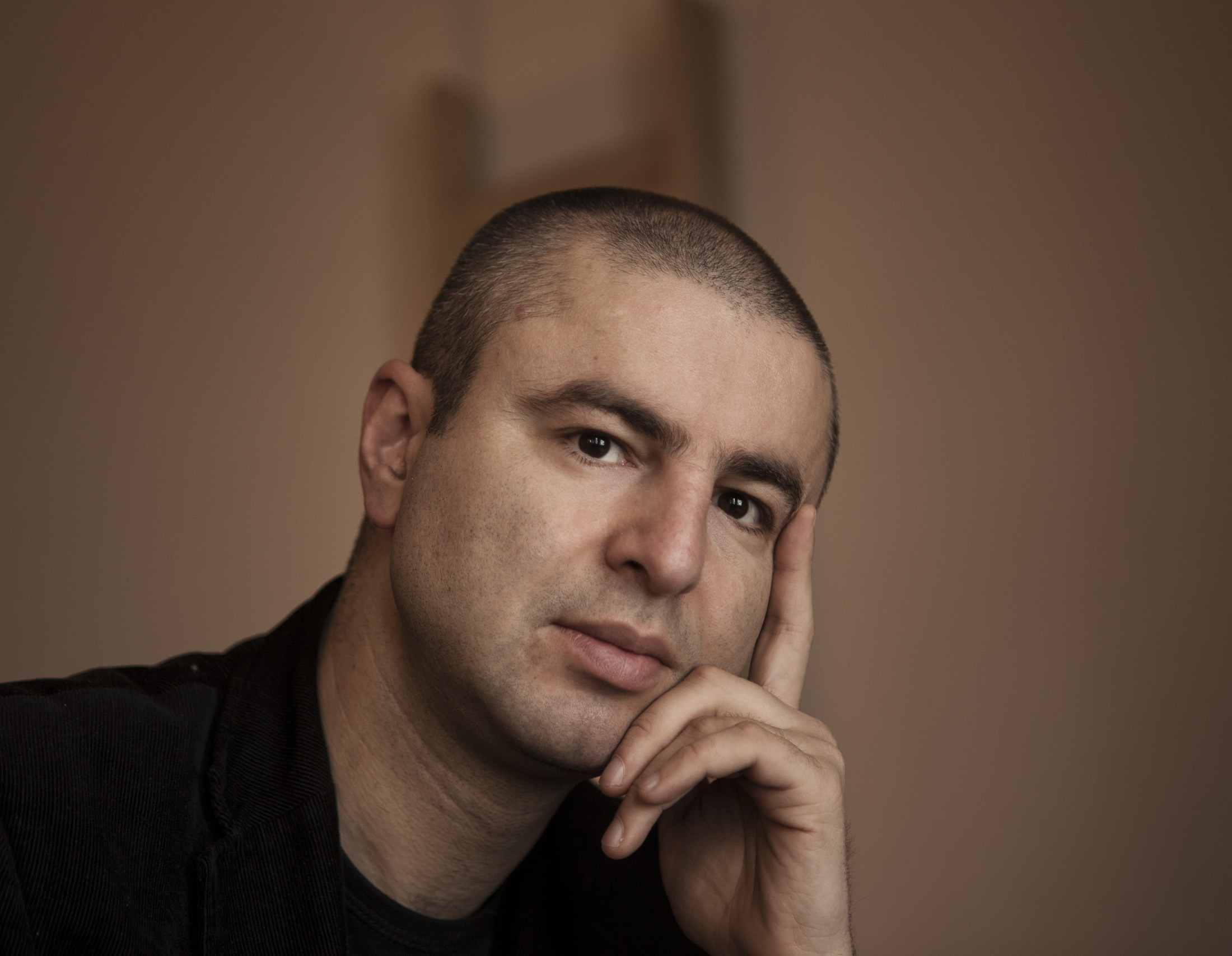 Nikola Madzirov, poet from Macedonia and co-curator of the Poetry festival 2018. Photo by Thomas Kierok

From the 30th of November to the 1st of December 10TAL is hosting our annual poetry festival! For the 22nd year in a row 10TAL presents the Stockholm International Poetry Festival, this year at The Royal Swedish Academy of Fine Arts. We welcome you to the largest gathering for international poetry in the Nordic countries.

Poets from four continents, including countries such as Cuba, Albania, the USA, Malaysia, Macedonia, Palestine, South Korea, Denmark, and Germany, will take part in this years festival. The festival is a grand celebration of poetry and has been organized since 1997, when the poet Tomas Tranströmer inaugurated it together with the Swedish musical act The Fleshquartet.

Several hundred of contemporary society’s most renowned and innovative poets (in over 40 languages) have taken part in these festivities over the years, together with Swedish poets, musicians, and artists. For the 13th time, 10TAL is also awarding the annual Mare Kandre Prize, which is given to an innovative author working in the spirit of legendary author Mare Kandre (1962–2005). For the 7th year in a row the poetry scene Akt Ung celebrates gifted poets between 16 – 27 years of age.

The Stockholm International Poetry Festival 2018 has chosen the urgent theme Home – From Home. In 2010, the theme of the festival was Welcome, which was a protest against the uncharitable and dangerous asylum and refugee politics of the Sweden Democrats. The intention was to highlight the dangers of normalizing the xenophobia that is rooted in their politics. The Sweden Democratic Youth Association promptly demonstrated the 2010 festival, and the exiled writers that were invited to it, by reading classical Swedish writers such as Wilhelm Moberg and August Strindberg outside of the Royal Dramatic Theatre, where the festival was held.

A general lack of solidarity with human beings that are fleeing war zones, environmental catastrophe, and poverty has spread even more in Sweden since 2010. Humans are re-imagined as numbers and are bundled together under the concept of »the refugee crisis«. Poetry, however, can tell us stories about each human being, and what is shared among us all: the love for the people that we love and our homes, no matter if we carry them on our backs, in our hearts or in our dreams.

During the 2018 festival, we ask questions such as »What is a home?«, »What does it mean to be away from home?«, and »How do you create a home in a new place?«. The common the denominator among the participants at this years festival is that they all write about moving from one home to another, from one language to another – recollection or hope. Some have travelled far from the place where they were born, in rootlessness or exile, while others have fled memories of death. The Macedonian poet Nikola Madzirov, who is co-curating this years festival together with its founder and 10TAL’s editor-in-chief Madeleine Grive, writes that language is the poets city when the safety of home is just a memory.

Some of the participants

Jan Wagner (b. 1971) is one of Germany’s most celebrated contemporary poets. Wagner is particularly appreciated for the way in which he combines traditional verse with unshackled playfulness, as well as his surprising imagery. He is the only poet to receive one of Germany’s most prestigious awards: The Leipzig Book Fair Prize. Wagner’s poetry collection Selbstporträt mit Bienenschwarm has been translated into Swedish by Aris Fioretos, and immediately sold out. During the 2018 festival Wagner will read poetry from the stage together with Fioretos.

Johannes Anyuru (b. 1979), made his poetry debut with the celebrated collection Det är bara gudarna som är nya. In this collection, Anyuru uses the Homeric epic The Iliad as the framework for his depiction of contemporary Sweden. It is a story about war, to be away from home, and about returning home. In his writings, Anyuru portrays the ills of contemporary society with haunting precision and strength. According to Anyuru, it is necessary to be a political poet in order to give the faceless masses of society faces and voices. Home and belonging are central questions to Anuyru, and they often come with violent resolutions.

Jila Mossaed (b. 1948) was born in Iran, and lived there until she fled to Sweden at 38 years old. She is a poet and prosaist, and was recently inducted into the Swedish Academy.  Mossaed has been described as a »masterful interpreter of the terms of exile«, and is highly regarded in both Sweden and abroad  In her writings she depicts the liminal character of exile, as well as bringing questions of origin, place, and belonging to the forefront. Her most recent poetry collection Vad jag saknades här was published in 2018.

Nikola Madzirov (b. 1973) is one of the most celebrated poets of Macedonia, as well as the co-curator of the Stockholm International Poetry festival 2018. His poetry has been translated into more than 30 languages, and he has also received the prestigious Hubert Burda European Poetry Award.  Madzirov’s family were refugees from the Balkan War and in his poetical landscape political and personal geography interlink, challenging the way in which traditional history is written. His is the poetics of dislocation, migration, and return, where layers of history and experience merge together to create a deeply personal mythology.  Madzirov’s poetry collection Remnants of Another Age was translated into Swedish by Miodrag Stankovski in 2013.

Jonas Gren (b. 1981) is a poet who encourages us to think about the future, but also about the nature of humanity and our place on Earth. He has studied social-ecological systems at the Stockholm Resilience Center and is affiliated with the art centre Ställberg Mine in Bergslagen, Sweden. His multifaceted poetry directs our attention to the experience of living and existing in our anthropocentric age.  On the theme of the festival, Gren has said: »For me, home is context. To be part of something. A place, its inhabitants, the buildings, plants, animals, traffic, and everything else. In particular, it has to do with memories, history.« His most current poetry book is Dälden, där de blommar (2018), his third collection at 10TAL Bok.

Luljeta Lleshanaku (b. 1968) has been called a pioneer of Albanian poetry. She grew up under house arrest during the Stalinist dictatorship of Enver Hoxha, a time of oppression and isolation. Her writings combine a the history of the nation with her personal struggles, in search of atonement and understanding. She is the research director at Tirana’s Institute of Studies of Communist Genocide. Her most recent poetry collection is entitled Negative Space (2018).

Rasha Alqasim (b. 1989) travelled to Sweden from Iraq in 2014 to participate in poetry readings. Since then, she has lived in exile. Her first book, Jag matar kriget med dem jag älskar, was published by 10TAL Bok in 2017, translated by Elisabeth Hjorth, Sara Mannheimer och Kholod Saghir. Her poetry depicts the ordinary world of women in the home, and their efforts to uphold a semblance of normality when their husbands and sons have been lost to violence and war. Her book is a strong and uncompromising depiction of patriarchy, war, the struggle for survival and a young woman who dreams about literature and life.

Victor Rodríguez Nuñez (b. 1955) is a Cuban poet, critic, and translator, who is currently professor of Hispanic Studies at Kenyon College, Ohio. He is an ardent opponent of nationalism, an ideology that he perceives as being deeply perverse and limiting. The poetry of his book Night Badly Written (2017) is that of migration, transnational consciousness, and the act of writing »from the glance of otherness«. It is said that Rodríguez Nuñez’s poems prowl around the edges of the night, in search of a porousness that defies the concept of a border. That’s why he says: »the shadow doesn’t ask for my passport«. In an interview from 2014, he says that the creative process has become even more central to his poetry. He views the poetic form as ideologic, and his own work as the pursuit of a poetry without borders. Rodríguez Nuñez’s poetry has been translated into Swedish by Lasse Söderberg under the title Världen ryms i en alexandrin (2011).

Katie Ford (b. 1975) is an American poet from California, with a background in theology from Harvard University. She is currently professor of Creative Writing at the University of California. Ford has been described as one of the most thoughtful and talented poets of her generation, with a poetic language that is deeply immersed in religious imagery and metaphor. In an interview in The Millions, she describes theology as an »imaginative endeavour« that uncovers the fragile relationship between human language and the unknown. Ford’s poetry is searching for a way to express that which cannot be expressed: questions of faith, natural disasters, political violence and betrayal, as well as everyday life. Ford’s latest poetry collection is Blood Lyrics (2014).

Hanna Rajs Lundström (b. 1991) is a poet who made her debut in 2018 with the poetry collection The arms, published by 10TAL Bok. Upon publication, The arms was celebrated for its unique language and deeply personal approach. Her poetry has been described as one of the most interesting, young voices in Sweden, in particular because of her description of the experience of being Jewish in a time of conspiracy theories, scapegoating and far-right politics. Her language is deceptively simple, using youthful street language or a kind of Facebook Messenger language in combination with words that are firmly rooted in the history of her family’s experience during the 20th century.

Eddin Khoo (b. 1969) is a celebrated poet and translator from Malaysia. He studied political science and Islamic philosophy at the University of Newcastle Upon Tyne, and Asian Arts and archeology at the University of London. He is founder of Pusaka, a study and documentation centre for Malaysian theatre, a traditional art form that is in danger of disappearing from North East Malaysia, since it has been banned by the Islamic party of Malaysia. He lives in the open space between various cultural traditions and the universal pain of the world. Besides writing and translating poetry, he draws the traditional artistic forms out of the basement of time. The breaking of history is a way of occupying lands without warring. To Eddin Khoo identity is traveling, leaving and returning to different  places — a way to be a nomad that leaves behind him the memories and the foundations of certainty.

Starting in 2018, Palestinian poet Sahar Mousa is a 2-year ICORN sanctuary writer in Stockholm. She has published two poetry collections and also works as an editor and writer in Gaza, where her article series »The War Diaries« received much attention after being published on Facebook, including death threats from various local IS-groups. Mousa’s poetry tackles social injustice, as well as the impact of war on the lives of individuals.